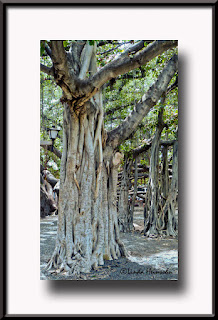 These trees, in Lahaina Park on Front Street, are actually one tree.  The banyan grows roots down from it's trunk or branches, connecting to the ground and starting a new trunk, often several yards away from the parent trunk.  Perhaps it's kind of like cane tipping propagation employed by Pacific Northwest blackberries.

This banyan tree was brought to Maui from India in 1873 when it was eight feet tall.  Today it is 80 feet tall and has 12 major trunk and lots of minor ones.  It covers nearly the entire city block!  Very shady.
Posted by Linda Heinsohn at 1:12 PM No comments: 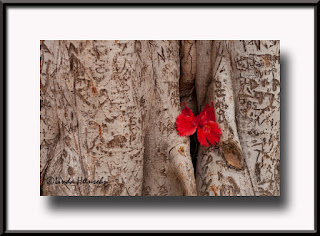 Found this at the Lahaina Banyan Tree Park.  A nice contract in textures!
Posted by Linda Heinsohn at 12:51 PM 1 comment:

Marker at Honokahua Burial site near Makaluapuna Point, Maui.  The Ritz-Carlton Hotel was under construction at this site in the late 1980s.  Builders began excavating the human remains of over 1000 native Hawaiians, with more still interred.  Many of the remains were dated back to AD 610.

The continued excavation of this burial site by the hotel led to native activism and eventually, a law prohibiting the disturbance of such sacred sites.  The Ritz-Carlton regained their sensitivity in 1990, reinterred the remains, moved the hotel location back up the slope, and the site is beautifully grassy and peaceful today.

The gecko, or mo'o, is regarded as a guardian or protective spirit.
Posted by Linda Heinsohn at 12:34 PM No comments: 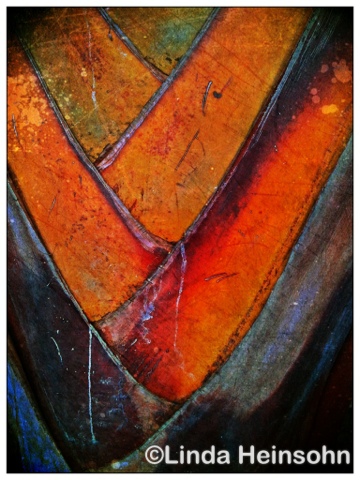