What's On The Ceiling

I'm a "What's on the ceiling?" kind of photographer. I have photos (somewhere) of cathedral ceilings in France, The Netherlands, Denmark, Sweden, and Belgium. Thank heaven cameras and phones now have functions allowing a ceiling photo-nerd to be more composed with her shot rather than just setting the timer, putting the camera on the floor, then stepping back quickly hoping to get out of the wide angle view before the shutter clicks.

Today we had lunch at Protein Bar in Downtown Chicago (highly recommend). Here's what's on the ceiling there.  Post in Photo Toaster for contrast, white balance, and adding a scratched metal layer. 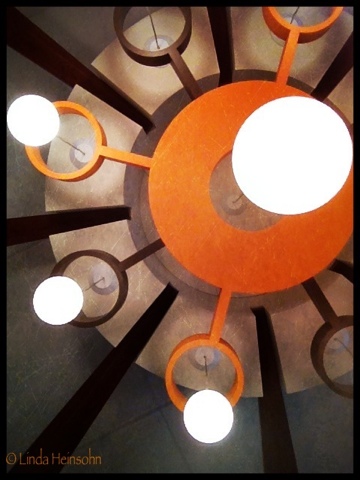 Posted by Linda Heinsohn at 5:03 PM

Cool! And what is the strangest thing you've ever seen on a ceiling?

Probably the mixture of gargoyles and human faces in York Minster, England. The tour guide was adept at pointing out the likenesses of men who worked on the cathredral or who were prominent townsmen of the time. Then, next to that person, there would be a dragon or a devil or an angel. Hmmmm.