In The Deep Mid-Winter 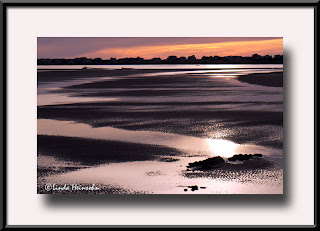 Took this at the beach yesterday, December 22, on the tidal flats just north of Depoe Bay.  It was one of those lucky days at the Oregon Coast--bright, with strong sun, and 50º!  The Cascadia earthquake in the 1700s drowned a bunch of ancient trees here.  The relics of their bases sometimes poke out at very low tide.

I did a bit of prodding with individual RGB  levels adjustments to bring back the color I remembered from yesterday.  The big 'S' curve in the photo was the juice of the shot but it was hard for me to narrow it down while shooting since it was such a large tidal area and I liked so much of what I saw.  With three non-photographers waiting for me in the car, I took as many shots as I dared then used the crop tool today to put the 'S' curve into the framing I liked most.
Posted by Linda Heinsohn at 4:44 PM

This is beautiful, Linda. You should have given me a call -- we could have met up for a bit! Wish I'd seen this along with you. --Carol Leigh

Thanks, Carol! I would have loved to meet up that day. It was an interesting day for photography on the Oregon Coast. I'm looking forward to your Astoria Adventure in September. That city has always fascinated me yet I've never had time to do more than just drive through.