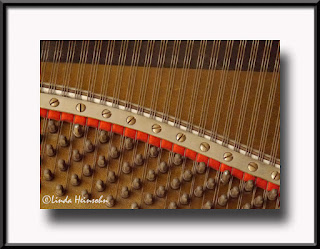 Hugh and I drove about two hours south of Portland today to Falls City, Oregon.  A speck of a burb where 30,000 people lived and worked in the mid-1800s but where only a whisper of commerce still remains. Our mission was for Hugh to try out a musical instrument for sale at an antique shop there.  I poked around with my camera.

The two owners of the shop had a fun assortment of piano works stashed in the back, including a wall of soundboards (harps) shelved up on the wall near an open door.  I loved the curving detail of the strings, felt and pegs on this old Wurlitzer harp.

These guys go collecting old, junk pianos listed on Craigs List for free.  Then, they gut the works to make computer desks out of the cases which are often made from exotic woods, especially the centenarian pianos.  The harps they encase in a box, add legs and plexiglass.  What you have then is a giant coffee table, train table, or dining nook table.  As to what they do with the keys (the action), which are pure ivory, I've no idea.  But what a recycling process!

End Of The Road Antiques, Falls City, Oregon.  I was going to post a link to their store.  Alas--there are still some businesses in the world who haven't developed a web presence.  Imagine!
Posted by Linda Heinsohn at 10:18 PM

Beautiful repeating patterns of strings and "dots" all tied together by the arch. Sounds like a great place to visit.